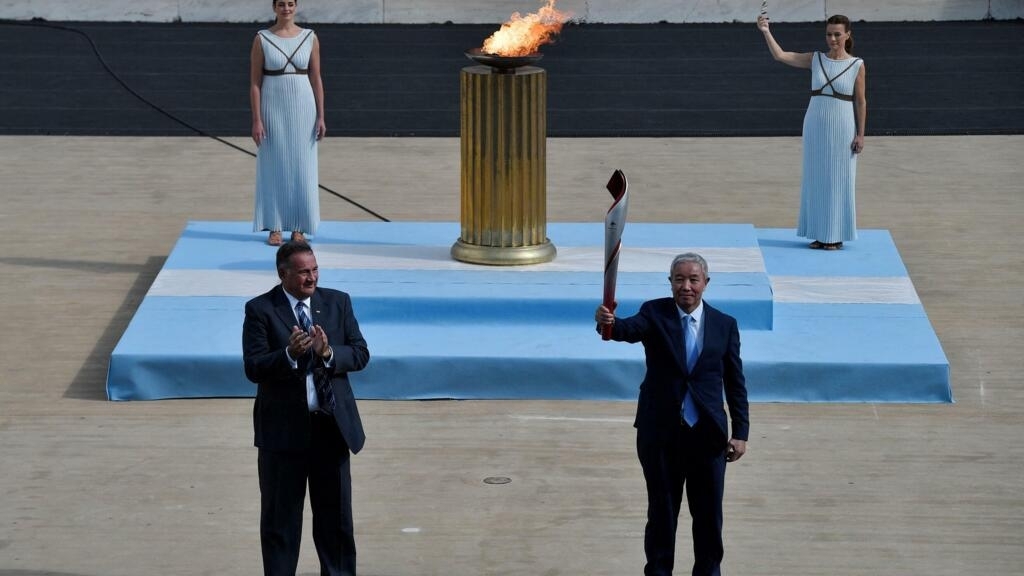 The Olympic torch began its journey Tuesday from Athens to Beijing, three and a half months before the 2022 Winter Olympics, strongly denounced by human rights defenders as a communication operation of the Chinese regime.

Barely extinguished in Tokyo, the Olympic flame was re-lit for the Beijing Winter OLYMPICS. The symbol of Olympism has begun its journey to China, not without controversy: human rights defenders denounce “Genocide Games”.

“China has the ambition to organize safe and splendid Games”. In Athens, the vice-chairman of the Beijing-2022 organizing committee, Yu Zaiqing, gave the start of the traditional long course of the flame, lit the day before in Olympia.

She is scheduled to fly to Beijing, where she will arrive Wednesday morning before beginning a tour of China, until the opening ceremony on February 4, 2022 at the Beijing National Stadium, the “Bird’s Nest”.

“The Olympic flame will travel to the Great Wall and through other parts of China, bringing with it the light of peace and friendship,” said Yu Zaiqing.

The Olympic flame for the 2022 Beijing Winter Games, which will be held from February 4 to 20, was lit at the ancient Greek site of Olympia according to the traditional ritual, but in the absence of public due to Covid-19 #AFP pic.twitter.com/MCzA7kXEm5

In Beijing, the first city in history to host the summer and winter Games, about 2,900 athletes from 85 Olympic committees are expected to compete in the Olympics from February 4-20. The Paralympics will follow from March 4 to 13.

Pandemic obliges, there were no spectators, neither at the lighting of the flame on Monday at the ancient site of Olympia, nor at the ceremony of handing over to the organizers on Tuesday at the Panathenaic stadium, nor for the torch relay, very largely shortened.

“The pandemic may have prevented us from holding the flame ceremony in the presence of the public, but I am sure that the successful and safe organization of the Games will be another victory of humanity over the coronavirus,” hoped the president of the Hellenic Olympic Committee, Spyros Kapralos.

Far from being congratulated, human rights defenders protested against the holding of the Olympic high mass in China, as they did for the Summer Games in 2008.

In particular, they challenge Beijing’s policies in Tibet, Hong Kong and especially in Xinjiang (west), against the Uighurs, a Turkic-speaking Muslim minority.

On Monday, during the torch-lighting ceremony, activists tried to unfurl a Tibetan flag and a “No Genocide Games” banner before being stopped by security.

“This is ‘sportwashing’ (literally sport-money laundering, a communication operation aimed at hiding human rights violations, editor’s note). There are no legitimate reasons to hold the Games during a genocide,” said Zumretay Arkin, spokesman for the World Uyghur Congress.

The United States claims that Beijing is engaged in genocide against Uighurs and other Turkic peoples in Xinjiang, where experts estimate that more than a million people are incarcerated.

Beijing denies the term genocide and describes the camps as vocational training centers, a claim rejected by the Uighurs who say they are forced to renounce their religious traditions.

According to these activists, Hong Kong residents, Tibetans and Uighurs are subject to “Orwellian” surveillance in China, which they say worsened after the 2008 Olympics.

The IOC is legitimizing “one of the worst human rights violations of the entire twenty-first century” and defiling the spirit of the Games, said Pema Doma, campaign director of the organization “Students for a Free Tibet”.

“These Games cannot go as planned, they must be postponed,” she said.

The President of the International Olympic Committee Thomas Bach beat him in breach calls for a boycott, defending the political neutrality of the body and calling on States to take responsibility.

Although he was prevented from participating in the 1980 Moscow Games boycotted by his country, the FRG, as a fencer, he argued that a boycott would only hurt athletes.

The IOC works on the issue of human rights “within the limits of (its) remit”, he assured last March.

Basketball – NBA: This terrible observation on the arrival of Westbrook to the Lakers!

Basketball – NBA: The heavy message of meaning from the Lakers coach on Anthony Davis!