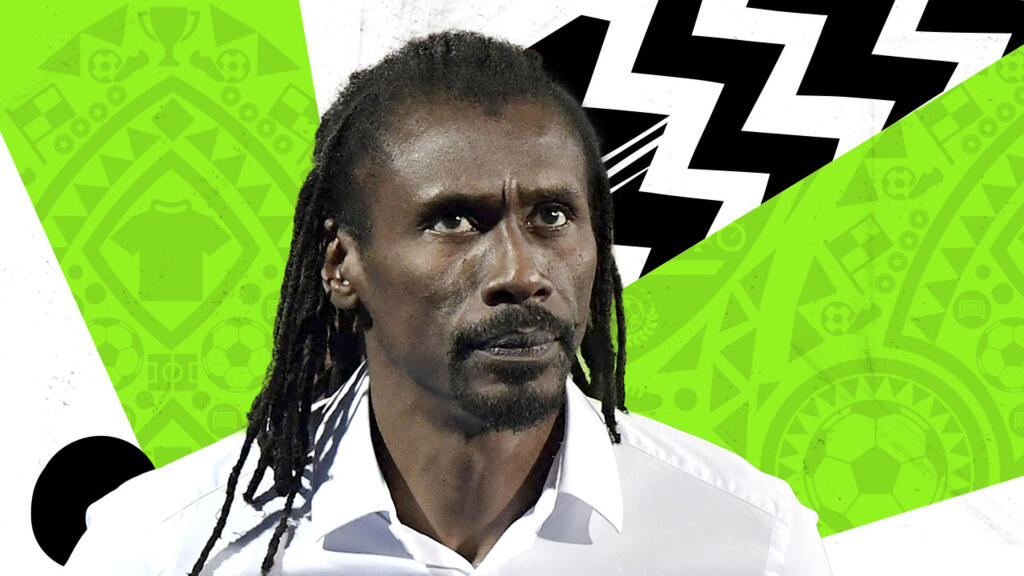 Despite his excellent record at the head of the Senegalese selection, the charismatic coach of the Teranga Lions, Aliou Cissé, approaches the African Cup of Nations (CAN) with an obligation of results. The expectation is great among the supporters, who hope for a first coronation in Cameroon.

How long will Senegal wait his first trophy ? In the country of Teranga, the question is on everyone’s lips and the national coach, Aliou Cissé, in office since 2015, is now up against the wall. If he does not win the Africa Cup, which he is due to start on Monday, January 10 against Zimbabwe, he risks being shown the exit. A shame for the one who carried Senegal first as a player and then as a coach.

Aliou Cissé was born in Ziguinchor, in Casamance, in the south of Senegal, on March 24, 1976. When he was 9 years old, his family emigrated to France and settled in Champigny-sur-Marne in the Paris region, where – wink of fate – he meets Djamel Belmadi, current Algeria coach. It is on the side of Lille that the young Senegalese hardened to football before leaving for the Ardennes, in Sedan, to play his first minutes as a professional.

>> To (re) read: CAN-2019: Cissé – Belmadi, crossed destinies of two contenders for the throne of Africa

“I remember someone ambitious and hardworking,” recalls Pierre Deblock, a partner in Sedan, to AFP. “Every Monday, we had to go for a run in a wood and we, the elders, had found a small shortcut on the course. When he had just arrived and he was very young, he lectured us. It made me laugh, you could tell he wanted to succeed. “

Athletically above the rest, Aliou Cissé is perfectly equipped to respond to the intensity demanded by his trainer, Bruno Metsu. The coach installs him as captain of the Teranga Lions. An inspired choice: the two men allow Senegal to experience a golden era. In 2002, Cissé hoisted his family in the CAN final in Mali, but his team conceded the title against Cameroon (3-2). The following summer, the Senegalese created a surprise at the 2002 World Cup, by beating the defending champion France in the opening match and then managing to qualify for the quarter-finals, the highest stadium ever reached by an African team in World Cup. A performance only imitated by Cameroon in 1990 and Ghana in 2010.

(1/6) Djamel Belmadi, the Algerian coach “more popular than the president”

(3/6) Mondher Kebaier, at the head of a Tunisian selection “too big for him”?

(5/6) Amir Abdou, the spark of the first African Cup of the Comoros

(6/6) Mohamed Magassouba, a lasting interim at the head of Mali

“Aliou Cissé, he was not a flamboyant player. He was one of the needy, duty players who perform obscure but necessary tasks far from the spotlight. We could compare him to Didier Deschamps,” notes Salif Diallo, major reporter and head of the sports department of the Senegalese Press Agency (APS), contacted by France 24.

A successful retraining on the bench

His playing career, which took him from Sedan to PSG via Birmingham and Montpellier, finally ended in 2009 in Nîmes. But Aliou Cissé does not take long to retrain. In 2012, he became assistant to Karim Séga Diouf, coach of the Senegalese national Olympic team. In 2013, he was left to take sole control of the Under-20 team during the 2013 Francophonie Games.

On March 4, 2015, the consecration arrives: he succeeds Frenchman Alain Giresse at the head of the national team. Senegal then just experienced a humiliating CAN, having been unable to get out of the hens.

“Aliou Cissé, it was the choice of the supporters of Senegal. After the CAN-2015, we are demanding the departure of Alain Giresse. We ask to put an end to the ‘white wizards‘and to name someone from the region “, explains Salif Diallo.” With him, Senegal has become a winning machine. We can deplore the quality of the game, but Senegal wins against its opponents. Cisse also put an end to the extrasport problems which diverted the selection from football. “

He sets up an effective 4-2-3-1 system which relies on key players, playing in the biggest European clubs. Édouard Mendy keeps the goals, while Kalidou Koulibaly is the boss of the defense. Parisian midfielder Idrissa Gueye manages the transitions, while offensive animation often relies on Liverpool star Sadio Mané.

“He is a big brother with his players. He incubates his den of Lions de la Teranga. He will never get carried away with a player who will miss his match”, explains Salif Diallo, who also notes that the manager keeps his players as far away from the media as possible. “He has an aura of his brilliant selection past that allows him to embody that.”

Under the leadership of Aliou Cissé, Senegal is improving. At CAN-2017, for his first continental campaign, his team lost in the quarter-finals, but it was against the future Cameroonian winner.

Present at the 2018 World Cup, Senegal came out in the group stage for a case of … yellow cards. The Teranga Lions and Japan are then tied for second place with the same number of points (4), the same goal difference (0), the same number of goals scored (4) and goals conceded (4). ). In this type of exceptional situation, it is then the number of warnings received which decides.

Victories but not the way

CAN-2019 in Egypt could have been perfect. Aliou Cissé’s men are imperial throughout the competition with the exception of two matches: the first and the last, both against Algeria of Djamel Belmadi, who deprives them of their first continental title. Another disappointment which partly affects Aliou Cissé’s popularity.

He had results. He made a CAN final, he brought Senegal back to the World Cup, but people now want more. They want the way, that Senegal produces a beautiful game. Senegal beats its opponents but the game does not convince, “says Salif Diallo.” We reproach an excess of verticality in the game. It is often said that it is the only way to win in Africa. Algeria under Belmadi proves not: we can play ball and win matches. “

The results remain convincing. Under Aliou Cissé, Senegal became the best African team in the Fifa rankings, pointing to the 20e place in the world ranking of the best nations in world football. Of the 62 matches led by the former captain of the Teranga Lions, he has posted a largely positive record: 40 wins, 14 draws and only 8 defeats.

However, the supporters of the Lions of Teranga approach the CAN in Cameroon with fear in their stomachs: “Senegal is placed in the favorites thanks to its previous performances and the quality of its players but everyone struggles to see it the winner”, notes the great reporter of the APS. “Aliou Cissé is under pressure. Today, the supporters no longer want to forgive him. The selection is full of players playing in the biggest European clubs. It is closely supported by the government and the federation. has never had so much stability. People wouldn’t forgive anything other than a title or a new final. “