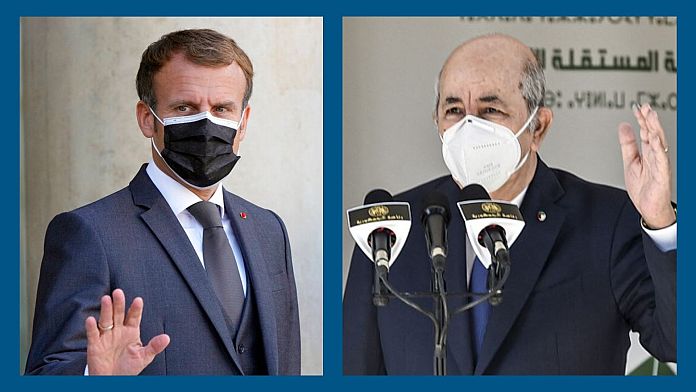 New episode in the diplomatic tensions between France and Algeria”. This Sunday, the Algerian president reacted to the statements of his French counterpart. He said to demand from Paris a “full respect for the Algerian state“.

Mr Macron sparked anger in Algiers after remarks, reported on Saturday 2 October by the French newspaper world, accusing the system”politico-military“Algerian to maintain a”memorial pension“by serving his people one”official history” that “does not rely on truths“.

In the day of October 2, Algiers decided the recall “immediate“of its ambassador in Paris, Mohamed Antar-Daoud, and, as another measure of retaliation, banned, in the aftermath, the flight over his territory to the French military aircraft of the anti-jihadist operation Barkhane in the Sahel.

The return of the Algerian ambassador “is conditioned on respect for Algeria, total respect for the Algerian state“, said this Sunday Mr. Tebboune to Algerian media, in his first public reaction to the words of the French president.

Asked if the closure of airspace to military aircraft is “final“, Mr. Tebboune explained that “in diplomatic relations there is nothing irreversible“. Corn “currently we are attacked in our flesh, our history, in our martyrs, we defend ourselves as we can“, he said.

“Relations with France are the responsibility of the people and history. History cannot be falsified“, continued Mr. Tebboune, in remarks considered rather dry by observers.

According to world, the French president also said that “the construction of Algeria as a nation is a phenomenon to watch. Was there an Algerian nation before the French colonization? That’s the question“. This is one of the passages that most struck Algerian public opinion.

The role of Turkey

Mr Macron has also provoked the ire of Turkey with his statements, taken in world, where he described Ottoman rule over Algeria as colonization. Ankara denounced statements”populist“.

After questioning the existence of an “Algerian nation”, Mr Macron added: “I am fascinated to see the ability of Turkey to completely forget the role it played in Algeria and the domination it exercised“.

Sensitive on memorial issues, Turkey, heir to the Ottoman Empire that controlled present-day Algeria for three centuries, repeats to envi have”no stain like colonization or genocide” in its history.

In Algeria, many commentators had interpreted Mr Macron’s remarks as having a objective “electoralist“, in the run-up to the April 2022 presidential election. “Politics in France are in the middle of the campaign, Macron too“, had told AFP Hassen Kacimi, Algerian expert in migration issues.

Other experts, such as Hasni Abidi, director of the Centre d’études Cermam in Geneva (Switzerland), referred instead to a “disappointment” from Mr Macron to the “unenthusiastic return from Algiers to his memorial reconnaissance yard“. Paris hoped to find common ground around a report given to Mr Macron by French historian Benjamin Stora.

Turkey is experimenting on a large scale with its vaccine, Turkovac