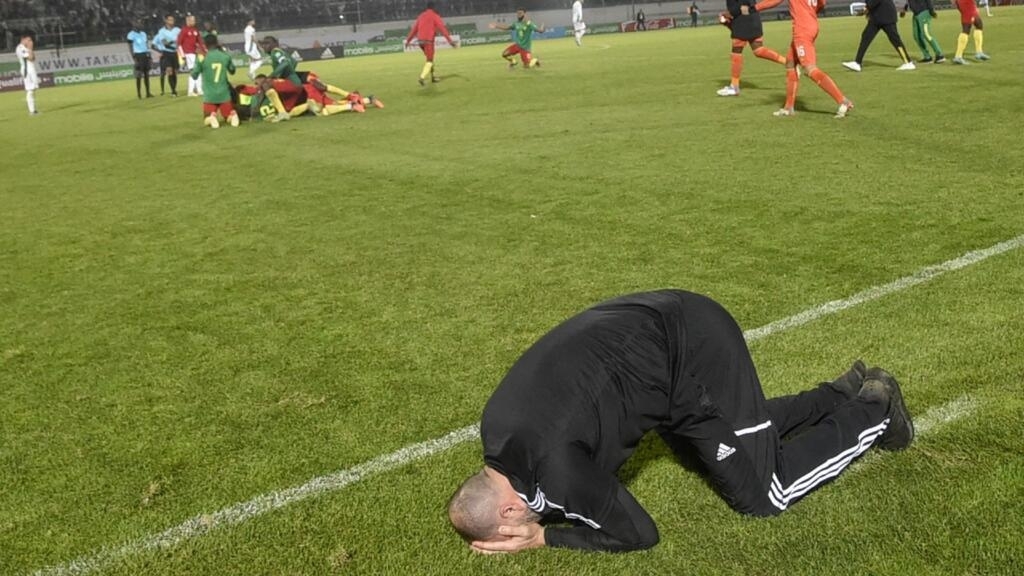 The Fennecs will not participate in the Mondial-2022. While they thought they had obtained their ticket to Qatar, the Algerians were eliminated in the very last seconds of the return play-off against Cameroon (2-1 ap). A bitter defeat experienced as a national tragedy.

At the final whistle of match between Algeria and Cameroon (1-2 ap)the Fennecs coach Djamel Belmadi collapsed on the ground, inconsolable. A few minutes earlier, the technician thought he had his qualification for the 2022 World Cup in hand.

His team had managed to come back to the score (1-1), a draw synonymous with qualification, but in the very last moments of extra time, Cameroonian Karl-Toko Ekambi showered his ambitions by scoring a decisive goal. The Indomitable Lions, beaten in the first leg (0-1), qualified for the benefit of the greatest number of away goals.

This is one of the images of this crazy evening: the tears of Djamel Belmadi, the coach of the Algerian selection, beaten by Cameroon (1-2), in the return dam of the 2022 World Cup#lequipeFOOT pic.twitter.com/ng7zIeqEf4


“The House of Cards Collapses”

“The sky has fallen on our heads. It’s football, it’s sport. But it’s our whole life, at the same time”, described Djamel Belmadi at a press conference. “We collapsed. We put our lives on hold for this match. For our country, our people,” he explained, still very moved after this cruel defeat.

“I don’t know if we failed mentally. Ten seconds from a World Cup, it’s surely a problem of concentration, of lucidity”, he noted, referring to the goal of Karl Toko-Ekambi. “We were never put in danger, never dominated, except on set pieces and these ten seconds”, he still regretted.

“The house of cards is collapsing,” said the 2019 African champion coach with this team. “Everyone is shot. We couldn’t see each other not going. How cruel to end like this ten seconds from the end.”

“This bad scenario, we have to get over it,” added Djamel Belmadi, who remained evasive about his future at the head of the Fennecs. “Today, it’s difficult for me to talk about the future. There are assessments to be made.” “We will have to get up. Algeria is a great nation. There are still great things to do, with or without me,” he concluded.

“The lack of lucidity of ours”

After this elimination, the Algerian press naturally made headlines on this match. Oran Daily makes it its front page and is sorry for the fate of this team which missed “a qualification for the 2022 World Cup in Qatar, which was reaching out to it”. For the Algerian newspaper, Karl Toko-Ekambi exploited “the lack of lucidity of ours to score an assassin goal, which literally sawed off the legs of the Greens”.

All about Algeria is not much more tender and evokes “a dramatic scenario”. “You should not sell the skin of the bear before killing it. The Algerians saw themselves a little too quickly in Qatar after the victory brought back from Cameroon last Friday, on behalf of the first leg of the African play-offs of the qualifiers for the 2022 World Cup,” said the newspaper.

The Evening of Algeria ironically for his part by titling “Bye bye Qatar”. For the daily, “Djamel Belmadi’s selection had a very painful match. To bow at the very end of the match on a murderous blow from Karl Toko-Ekambi”. El Mujahid believes for his part that the Greens have been “trapped”. The newspaper summarizes that the Algerians, “too nervous, were beaten by their pet peeve, the Indomitable Lions of Cameroon”.