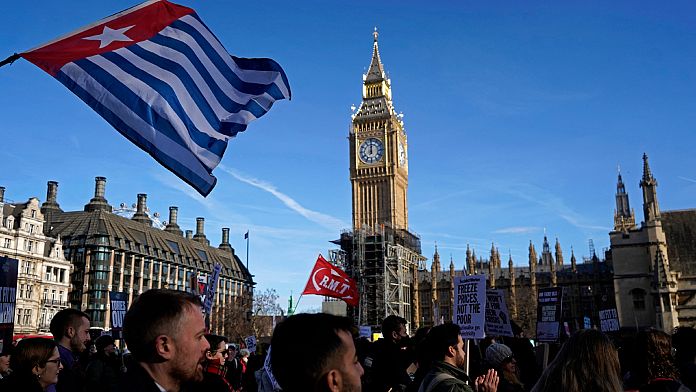 Thousands of demonstrators marched through several towns across the UK on Saturday, protesting against the soaring cost of living that is strangling low-income households.

In the capital, protesters marched behind a black banner calling for “lower energy bills“while a sign called for”Freeze prices, not the poor“, in reference to the increase in these bills which lead low-income households to give up heating.

Former Labor Party leader Jeremy Corbyn was present among the demonstrators, gathered at the call of the anti-austerity movement People’s Assembly, supported by several unions.

Other demonstrations were planned in the rest of the United Kingdom, from Glasgow (Scotland) to Cardiff (Wales) via Manchester (north of England).

“Maybe if you saved up on wine and cheese, it would help me keep the light on.“, could we read on a sign held by a protester in Glasgow, in reference to the parties organized in Downing Street despite the restrictions against the Covid-19, which caused a scandal and melted the popularity of Boris Johnson.

“The working classes should not pay for a crisis they did not create“People’s Assembly National Secretary Laura Pidcock tweeted.

Low-income workers in the UK face a “exceptionally difficult period“because of a soaring cost of living, also alerted the British trade union federation TUC on Monday.

The union federation pointed out in a report that the number of workers benefiting from the minimum income (“universal credit”) has increased by 1.3 million people compared to before the pandemic in the country.

A TUC survey of 2,200 workers shows one in eight say he or she will struggle to pay for basic necessities in the coming months.

The Bank of England has warned that inflation, already at a 30-year high of 5.4% in the UK at the end of 2021, could climb to 7.25% by April and is unlikely to return to normal levels. within two years. The BoE is targeting inflation at 2%.

Covid-19: the French Prime Minister announces the suspension of the vaccination pass on March 14