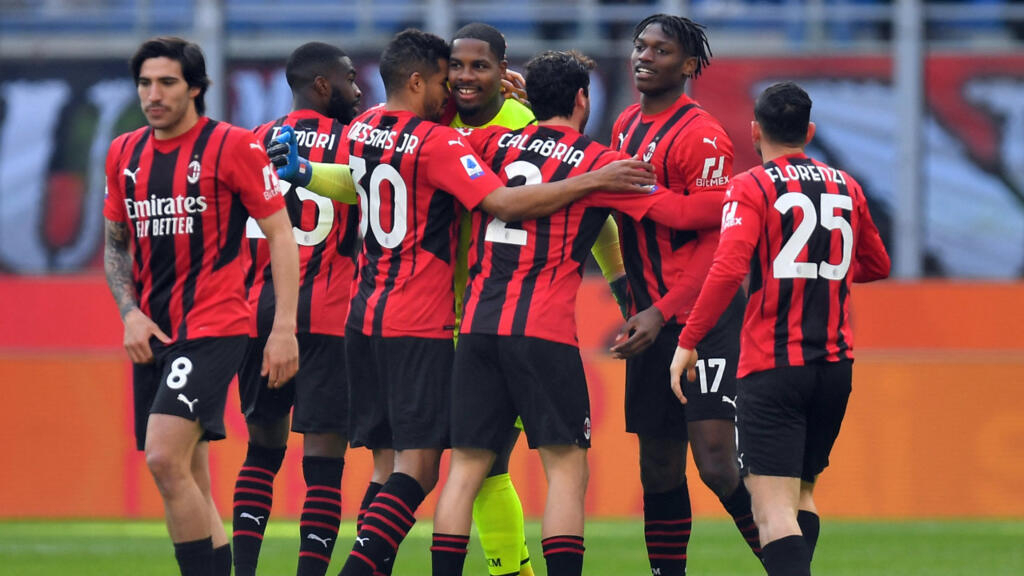 During this weekend rich in lessons, AC Milan took control of Serie A, while Manchester City continues to roll in the Premier League. In France, PSG signed a new success a few days before their clash in the Champions League against Real Madrid, which stalled against Villarreal.

the PSG narrowly won thanks to his striker Kylian Mbappé against Rennes (1-0), Friday at the Parc des Princes, at the start of the 24and Ligue 1 day, four days before receiving Real Madrid in the knockout stages of the Champions League. Despite this sluggish success, the Parisians continue to outrageously dominate Ligue 1 with 59 points, 13 more than their Marseille runner-up. Without shining, the Phocaeans strengthened their second place in Metz (2-1) on Sunday, taking advantage of the misstep of OGC Nice, beaten in Lyon (2-0). Surprise of the season, RC Strasbourg is back on the heels of the Niçois, at one point precisely, thanks to their victory at Angers (0-1). 14 days from the end of the championship, Saint-Étienne continues its “remontada” operation by continuing with a third victory in a row at Clermont (1-2). The improvement of the Greens has reshuffled the cards at the bottom of the classification where the Girondins de Bordeaux, new red lantern after their defeat in Lens (3-2), continues to sink.

Liga: Real stalls before C1, Betis and Atletico put on a show

A few days before its trip to Paris for the knockout stages of the Champions League, Real Madrid, still without its captain and striker Karim Benzema, was held in check on Saturday during the 24and La Liga day on the lawn of Villarreal (0-0). The Merengue remain at the top of the championship with four points ahead of Sevilla FC, winner at home against Elche (2-0). On the podium, 11 points from the leader, Bétis, the other Seville club, was able to count on a double from French international Nabil Fekir to sign a resounding success, far from its bases, against Levante (2-4 ). FC Barcelona snatched an unexpected 2-2 draw against Espanyol Barcelona on Sunday to keep the 4and place in the standings where Atletico Madrid, winner of Getafe on Saturday after a completely crazy match (4-3), returns to its height.

Manchester City easily defeated Norwich (0-4) on Saturday in the 25and Premier League day marked by the absence of Chelsea, crowned at the Club World Cup on Saturday. Yet outside, the leader (63 points) blasted the Canaries despite a revamped team. His runner-up, Liverpool (54 points with a late game), got rid of the red lantern Burnley (1-0), thanks to a realization of the former Monegasque Fabinho. Nothing is going well on the side of Tottenham, where Antonio Conte’s men lost to Wolverhampton (2-0). A third consecutive defeat which nails the Spurs to the 8thand place in the Premier League with 36 points on the clock.

AC Milan took advantage of the draw between Naples and Inter Milan (1-1) on Saturday, during the 25and day, to take the lead in the Italian championship. A goal from former Lille player Rafael Leao (8and) against Sampdoria (1-0) was enough for the Rossoneri to take a point lead over the Nerazzurri (2are), which however have a late match, and two on Napoli (3and). The clash between Atalanta and Juventus ended in a draw, quite miraculous for the Bianconeri who equalized in stoppage time (1-1). The “Old Lady” thus keeps two steps ahead of her opponent of the day, who also has a game behind. In the battle for the C1, AS Roma (7and6 points from Juve) stalled after a draw that was difficult to snatch in additional time on the field of Sassuolo (2-2).

Sensation in Germany where, to everyone’s surprise, Bayern Munich lost (4-2) on the lawn of Bochum, Saturday on the occasion of the 22and Bundesliga day, despite another double from Polish striker Robert Lewandowski. Despite this disappointment, the Bavarians remain at the top of the championship with 6 points ahead of Borussia Dortmund, who won away against Union Berlin (0-3). Behind the two cadors of the Bundesliga, Bayer Leverkusen consolidated their third place by dominating VfB Stuttgart (4-2), while still pointing 11 points behind the leader. With 18 points behind first place, RB Leipzig, which disposed of Cologne (3-1) on Friday, is in fourth position, followed by three clubs which have the same number of points as it, Hoffenheim, Freiburg and Union Berlin.

the stadium will not be reused for the quarter-finals