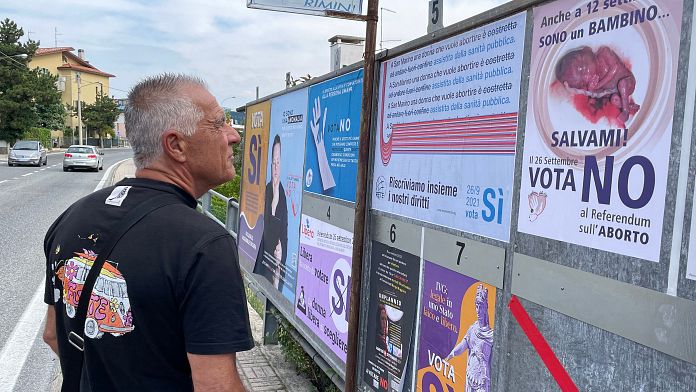 Side by side shock posters for yes and no… On September 26, in less than two weeks, the 33,000 inhabitants of San Marino will vote on whether to allow abortion up to 12 weeks of pregnancy. An explosive referendum that divides this mountainous micro-country landlocked in north-central Italy where the Catholic Church is omnipresent.

“It is said that abortion does not exist in San Marino. Women are going to have abortions outside our country, in Italy. They do it illegally because abortion is a criminal crime here. All this is shameful”Rosa Zafferani, a member of the San Marino Women’s Union (UDS) and former “captain-regent” (head of state) who returned her Christian Democratic Party card.

“The influence of the church is very strong”she said again, “for weeks”, the priests have been hammering in their homilies “yes to life, no to abortion”.

“I am a Catholic and the fact that I decided not to terminate my pregnancy voluntarily does not mean that I should refuse abortion to others”.

The activists of the UDS have pasted on the signs of the capital the posters of this already very tense campaign and whose outcome is uncertain, in the absence of polls, too expensive to organize.

“Vote yes, for freedom of choice “and” to get out of hiding”, proclaims a sign. “Even at 12 weeks, I am a child, save me!”a shocking poster with the image of a fetus strikes back. “I am an anomaly. Do I have fewer rights than you?”, pleads one young with down syndrome on another.

San Marino is one of the last states in Europe, along with Malta, Andorra and the Vatican, to completely ban abortion, even in cases of rape, incest, fetal disease or danger to the mother.

But the anti-decriminalization of ABORTION are also very raised, like Rocco Gugliotta, a 24-year-old handler :

“Why should only the mother decide ? A couple consists of a mother and a father. Why should it always be the single mother who decides ? Does the father have no decision-making power ? Pregnancy should be carried to term without abortion. If you really do not want the child, there is the possibility of having him adopted.”

The ban on abortion in San Marino dates back to 1865. It is a crime punishable by up to three years in prison for the woman and six years for the doctor who practices it.

Attempts to legalize abortion over the past 20 years have been vetoed by successive governments. It must be said that San Marino, very conservative, gave women the right to vote only in 1964, and divorce was introduced only in 1986.