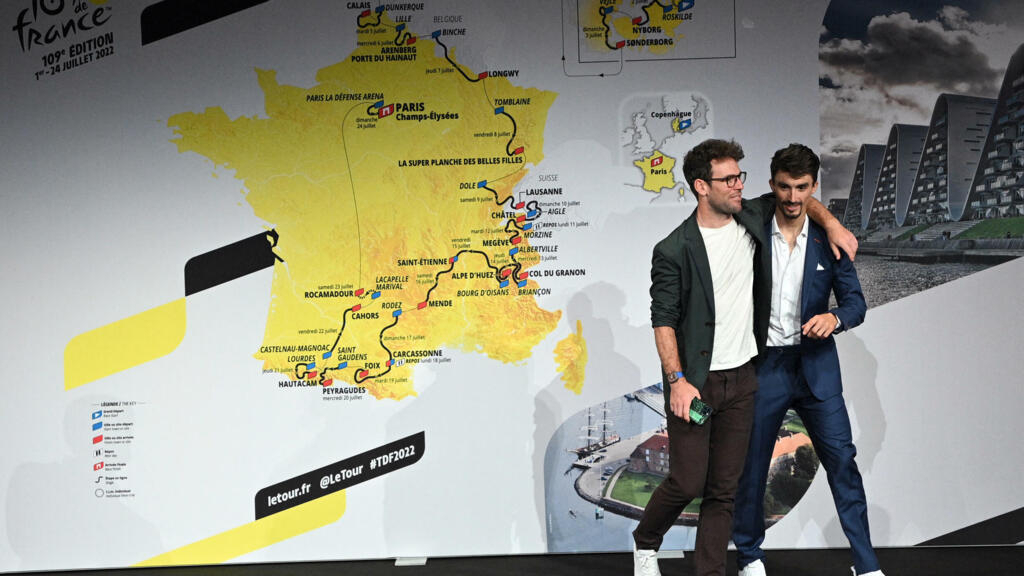 The 109th edition of the Tour de France will be mountainous, revealed Thursday the race director, Christian Prudhomme. But the summits will not be the only obstacles on the road of the runners. Many fear a first week full of shoehorns.

Back to the high mountains for the Tour de France. Race director, Christian Prudhomme, revealed on Thursday 14 October the route of the 109th edition of the Grande boucle. This year, the race seems promised to climbers. Alpe d’Huez will also be one of the five summit finishes of this high mountain year.

Between the start on July 1st from Copenhagen, the northernmost in the history of the event created in 1903, and the finish judged as usual on the Champs-Elysées in Paris on July 24th, the riders will pass through four countries (Denmark, France, Belgium, Switzerland).

They will leave a day earlier than usual, on a Friday, to allow the transfer to the north of France after the first three Danish days. They will then be treated to a sequence on the cobbles of Paris-Roubaix and stages especially favorable to punchers in the first week, profiled for riders such as Mathieu van der Poel, Wout van Aert and world champion Julian Alaphilippe.

The race, as in 2021, will cross the Alps before the Pyrenees and will be definitively determined on the occasion of a 40 km time trial scheduled in the medieval site of Rocamadour, ancestral place of pilgrimage, on the eve of the arrival in Paris.

>> See also : Women’s Tour de France: “There is something for all types of riders”

In the Alps, the Col du Granon, at an altitude of 2,413 meters above the Serre-Chevalier station, makes a symbolic return: it was only climbed in the race on July 20, 1986 for the last appearance in the yellow jersey of Bernard Hinault, the last French winner of the event (1985).

The France who wins by bike is Julian Alaphilippe. The cyclist proved it again in September by snatching a second world title from the noses and beards of the Belgian riders, yet at home. Winner of the first stage last year, wearing the jersey 18 times, the rider of the Deceunick-Quickstep looks with delight at the new course.

“My first impression is that it makes you want. The first week will be full of pitfalls. There will be everything: a time trial, stages of borders, cobblestones, arrivals for punchers, it is sure that there will be movement.

I think I’m aiming for steps. I will already take my time to enjoy my little holidays and I will think quietly about the Tour, the stages, when I have recovered. There, I just had the course, it’s a little difficult to predict goals.”

Previously loyal lieutenant of Thibaut Pinot, David Gaudu has gained momentum in the last two years within the Groupama-FDJ. He is now one of the leaders of the French team and, barring surprise, his team should count on him to play the general classification on the 2022 edition.

“The first week will be tricky. I had fun on the cobblestones in 2018, it requires recognition and even if it comes soon enough, there may already be a lot of gaps after the first stages. There is in particular this bridge in Denmark that could create curbs.

The mountain stages end at the top, it’s interesting. They are very beautiful on paper, very hard. There will be two large blocks: the Col du Granon and Alpe-d’Huez in the Alps, then Peyragudes and Hautacam in the Pyrenees. There will also be a beautiful arrival at the Board of the Daughters-in-Law. The mountain is a bit broken, with five beautiful arrivals. This will be played on the pedal.

We’ll decide with the team what strategy to adopt. But if there is one stage I dream of winning, it would be the Col du Granon. She is on my training routes when I am on internship in the Alps. I know the roads by heart the Alpe-d’Huez is mythical but they are less my roads. I would leave it to Thibault (Pinot, who won on this pass in 2015, editor’s note), it’s a bit his hunting,” concludes David Gaudu with a laugh.

Very often compared to Julian Alaphilippe because of his puncher qualities, Benoît Cosnefroy does not yet have his track record but he works there. In 2021, he secured his first World Tour victory at the Bretagne Classic before finishing third at the European Championships. In 2019, he revealed himself to the general public by wearing the polka dot jersey of best climber of the Tour de France between stage 2 and 16.

“It is always a special emotion to discover the Tour map. The start will be very stressful, whether it is for those who are aiming for the general classification or for the rest of the peloton. When you see we’re going to cross a 20-kilometer bridge… (the Storebæltsbroen, which connects the two main islands of Denmark, Editor’s note) and after, it will be cobblestones!

I discovered the course at the same time as you so I will have to analyze it in more detail after my holiday, but I noted that Christian Prudhomme spoke of small bumps just before the arrivals. On paper, these are arrivals that suit me”.

“It is a very good course, interesting from the first to the last stage. Sprints, wind, cobbles, short climbs, long, steep. It will be a really complete tour. I can’t wait to get started. I have already won at La Planche des Belles filles (the time trial of the penultimate stage in 2020, editor’s note). It will be a hard stage, you never know what can happen there. But it will still be far from the end. I have great memories there, I remember every moment of the climb, I can’t wait to climb it again.

There are a lot of suitors, we’ll talk about it when we get there. I just finished the season, I need some rest before I start thinking about 2022. There is a little more pressure when you have already won, that’s for sure.”

The Danish Deceunick-Quickstep rider, winner of the Tour of Flanders in 2021, is delighted that the Grande boucle is starting from his homeland and is looking forward to the first three stages at home :

“The time trial on the first day suits me quite well, it’s going to be a really fast time. It’s good for me. The next day, I hope we get a lot of wind across the bridge. It will be spectacular, there could be significant deviations. The third stage will mainly use my training routes, the peloton will pass a few hundred meters from my house. All my friends and family will be there, it will be really special. The first week in general is going to be super interesting. I love cobblestones, it’s really a field where I have fun. I love cobblestone classics so it’s a pleasure to see that again at the Tour de France.”