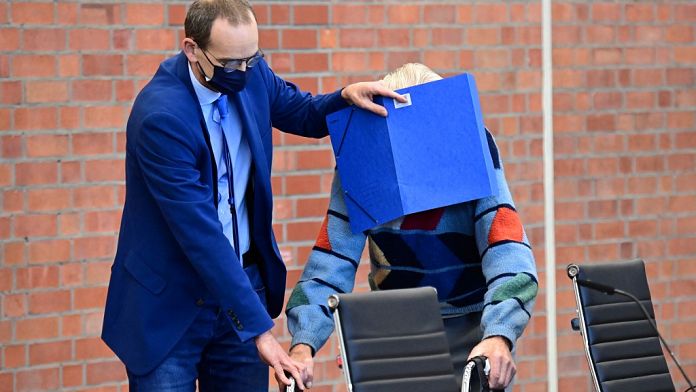 The oldest accused of Nazi crimes, a centenarian whose trial opened in Germany on Thursday, will not speak out on the facts against him, his lawyer said at the first hearing.

“The accused will not speak” on the facts “but will give information about his personal situation”, said Stefan Waterkamp, a lawyer for Josef Schütz, a former concentration camp guard and one of the last former Nazis on trial in Germany.

Appearing free, he entered the room with the help of a walker, hiding his face from the photographers.

However, he responded in a clear voice to the president of the tribunal, who asked him to confirm his identity and personal situation. The man lives in Brandenburg, a region neighboring Berlin, has been a widower since 1986 and proudly explained that he was going “soon to celebrate (his) 101st birthday, on November 16th!”.

This first of the 22 scheduled hearings, completed after only one hour due to his precarious state of health, was devoted to the reading of part of the 134 pages of the indictment by the prosecutor, Cyrill Klement.

Josef Schütz, former master corporal of the “Totenkopf” (skull) division of the Waffen-SS, is being prosecuted for “complicity in the murders” of 3,518 prisoners while operating in the Sachsenhausen concentration camp, not far from Berlin, between 1942 and 1945.

The accused was 21 years old at the time of the offences. In particular, he is suspected of shooting Soviet prisoners, “aiding and abetting systematic murder” by Zyklon B-type gas and “by holding prisoners in hostile conditions”.

Between its opening in 1936 and its liberation by the Soviets on 22 April 1945, the Sachsenhausen camp saw the passage of some 200,000 prisoners, mainly political opponents, Jews and homosexuals.

Tens of thousands of them perished, suffering mainly from exhaustion due to forced labour and cruel conditions of detention.

His willingness not to express himself on the facts and in particular the refusal of a possible pardon was received coldly by the civil parties.

“I’m moved. It’s been 80 years since I lost my father and this guy is a dirty guy, a bastard who refuses the possibility of guilt”, exclaimed to Antoine Grumbach, 79 years old. This Frenchman attends the opening of the trial in memory of his father, who was involved in the Gaullist resistance and murdered in March 1944 in Sachsenhausen.

The lawyer for 11 of the 16 civil parties, including seven survivors, Thomas Walther, wanted to be more confident: “For the plaintiffs, the fact that he appeared at his trial is already a positive sign and (…) something can happen. Perhaps such a man will come to the conclusion before his last hour that he still wants to explain himself about his past.”.

This trial is taking place one week after the aborted Irmgard Furchner, 96 years old, former secretary of another Nazi concentration camp. The reading of the indictment was postponed until 19 October after a bizarre attempt to flee the nonagenarian.